Alto Mayo is one of my favourite places to birdwatch. The cloudforest has spectacular views from a road that twists and turns through it, the Fernando Belaunde Terry highway, finished  during the late 70’s to finally reach the jungle of Northern Peru. The place where I was going was the campsite of one of the many fronts of workers who I’m sure must have suffered to build a road over these mountains. In fact the camp’s name, Venceremos (“We will win”), gives an idea of the epic struggle it must have been, but also offers a perception of the purpose nature serves around here: to extract, defeat and tame. 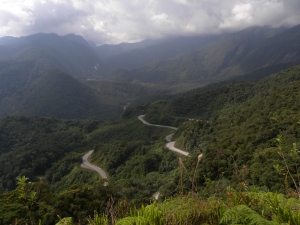 My friend Marco Leon works in the area studying orchids but also his NGO, INIBICO, recently received a fund to create an interpretation center right at Venceremos, so now the campsite is no longer abandoned. I have worked with Marco in the past and this time I went there to do some birding and give him the lists of what birds I found to add some value to his project.

I was at Venceremos one year ago and I must say that the work they have done there has produced an amazing change in the aspect of the campsite! Now it looks like a place to visit, with a building where the proper interpretation center will be, with explanations and photographs of the Alto Mayo Protected Area. On the building next door the park guards live and they have their kitchen, toilet facilities and rooms. I’m happy for this means that protection will be enabled though this is too positive for an area that faces extremely difficult conditions to manage.

Alto Mayo extends over cloudforest, a delicate and relatively small habitat, yet a very rich and biodiverse one; in fact the most biodiverse habitat in relation to its size in Peru. This diversity has attracted people from far places such as Cajamarca and Chiclayo, cities where opportunities are less and poverty abounds. They come here and claim a piece of land as theirs.  With no law enforcement from the authorities (many times authorities themselves are involved in “land trafficking”),  they start practicing the Andean way of agriculture: slash and burn, a technique that makes no sense in such poor soils as those of cloudforest. The steep hills are ideal for coffee. We are losing our forests to give coffee to a world already too hyperactive. That and cows, and what once was a beautiful forest full of ferns, moss, epyphites and bromeliads is now grazing green grass for cows. Of course, on the way to deforestation all the wood is taken care of and the hunger of the world for cedar will soon realize there’s no more of it.

It’s hard to be positive when one looks at the reality of things for the local people. I haven’t even listed all of the problems of the Alto Mayo. But we try to do something. I think the simple fact that truckdrivers see me looking for birds on the side of the road can at least raise the question of ‘what the hell is that gringo doing by the side of the road?’, and maybe the spontaneous answer will come too ‘oh, he’s watching birds and nature….maybe then I won’t throw my thrash out the window’. If all drivers would think that, because the amounts of thrash I saw on the side of the road are a shame. Even the bus companies throw their rubbish from the meals they give their passengers off the window!

But Alto Mayo remains beautiful and biodiverse nevermind all the trouble closing in around it. I dedicated my second day there to walk the side of the road until the afternoon and saw amazing birds: my first ever Blackburnian Warbler, a tiny bird that migrates from North America. Also a female Royal Sunangel, a hummingbird endemic of Peru.

In the afternoon we drove to the other side of the high pass to a village named Buenos Aires. There Marco works with Doroteo Valle, a man with a passion for orchids who is growing hybrids on his greenhouse. The pressure for orchids is great here and is common to see locals picking them up on the side of the road to

sell them to drivers passing by for ridiculously low prices.  That’s how Mr. Kovach got a flower of Phragmipedium kovachii, he bought it illegally for a few soles and took it (illegally) to the US where he quickly published the new species description getting ahead of a team of Peruvians who were doing just the same. He even put his name on the scientific name of the flower (kovachii). And though Mr. Kovac is in jail now, most people don’t run that luck and they get away with it.  The orchids of Alto Mayo are beautiful and abundant but some of them are extremely rare, like Phragmipedium kovachii which only grows in Alto Mayo. We must be able to reproduce it so that it doesn’t have to be extracted from its natural places and that’s what Marco wants too. Not only he works with Doroteo but with many other locals who have their green houses next to the road giving them assistance in how to reproduce the orchids so they don’t have to go and extract more from the wild.

Next day is long with some birding in the morning and a lot of driving to return to Tarapoto. On the way we visit a huge plantation of Stevia, a plant that replaces sugar, especially recommended for diabetics ‘cause it doesn’t contain any glucose.

There are good things happening out there, we just need to find them.