While I was in Alto Mayo I met Hugo. When he found out that I was interested on birdwatching he suggested I should go to Ojos de Agua, a dry-forest area of conservation located only one hour by car South of Tarapoto. I was definitely interested since dry forest offers a whole different set of birds and is a disappearing habitat due to human pressure for farming lands. Hugo happened to be the ex-director of an asociation of ‘campesinos’ (small farmers) who decided to actually create a conservation area. I asked him all the details of who to contact there and started planning the trip.

As I was leaving Tarapoto it started raining, which seemed a bit strange since it hadn’t for the past 3 weeks. I gave little attention to the rain knowing that the dry-forest is affected by a ‘rain-shadow’ effect, making rains go discharge on more eastern areas. Little I knew…Pablo Escudero, the current director of the association, and other members, greeted me at their office on the main square of a village named Pucacaca (‘Red Mud’ in Quechua language). “You brought the rains Pepe!” they exclaimed.

Pucacaca’s main square when we were ready to leave the first time. That motorcycla is the ‘furgoneta’ I mention forward.

I explained how I got in touch with them and my interest in visiting their area. They were all very kind and told me their fascinating story of how they went from ‘campesinos’ to conservationists: as rains were becoming rarer in that part of the Huallaga River valley, they thought it had to do with the accelerated pace of the deforestation in the, mainly due to corn plantations. Knowing that, I preferred to think of the rains I arrived with as a good omen. The area also has a demand to produce coal and dry forest trees are excellent for that. It’s fairly common to see the long chimneys of coal burning plants in th elittle town along the main road. They formed a society and started talking to people in their village searching for support. But people they wouldn’t understand that standing forest is important for rains. Still they went on trying to look for support to their idea of protecting a 2500 hectare forest. At one point a local timber mafia guy sent them to court alleging they were liars and just wanted to cut the forest for themselves (when that was actually that guy’s interest). The trial took 2 years during which they spent great amounts of money from their own pockets. But help would come. People of the Embassy of Finland (known in Peru for their support to nature conservation) offered them help. Other NGO’s offered technical and legal  assistance. Soon after they won the trial, a fund and their project was approved.

And so, in 2007 Bosque del Futuro-Ojos de Agua was officially the first Conservation Concession of San Martin region in North-East Peru. One listens to them tell their story and can’t help but believe them, not only cause truth is heard on their voice but because they seem (and later I realized they truly are) committed to conservation.

We decided to kill some time until the rains left and I offered to show them a presentation of a power point that me and a friend presented last year during a workshop in another village as an introduction to birdwatching with the purpose of training local guides. They called all available members of the society and we went on with that. Lunch passed and the rains stopped so we prepared everything to go to the starting point of our walk. From there we would walk for 2 hours until a cabin they had recently finished in the heart of the forest they protect. To get to the starting point we would take a ‘furgoneta’, a motorcycle with a small load box on the back. The road was very muddy and wet and the engine got soaked and turned off. We had to walk back and send to motorcycle to the mechanic and wait. After a second try with equal results we decided it was too late to leave that day. We would wait and meet at 3am that night at the office to go and do the walk without the heat and humidity of the day and to get to the cabin on time to do some birding, if the weather allowed it. I was given a room at one of the society member houses and hoped the weather was good the next day.

We were lucky, rain was light and motorcycle worked fine this time. The path was difficult because it was very muddy and with each step mud would stick to the rubber boots making each foot weigh 3 times more after a few minutes. There were 5 of us and some of them were carrying stuff to the cabin to set it up: a gas tank, a stove, and food. People here carry things with a band they call ‘pretina’ which they place on their forehead (where the weight sits), but the actual object is carried on the back where the ‘pretina’ ties it up, that way they can have free arms while they walk. I was amazed to see the man carrying the gas tank (35 kilos) on his forehead in such a miserable path. I have tried that method before and honestly I felt my head was about to break in 2. But we managed to get to the cabin at dawn. It was a beautiful spot.

Great Owl butterfly, check out the snake face on the lower right part of the wing.

After breakfast we went walking around the forest recording birds and whatever showed up. Along the way, giant snails were everywhere. They showed me a species of fern (Platycerium andinum) very rare that has only been recorded here and somewhere in Bolivia. Also trees such as Quinilla (Manilkara bidentada), a Giant Columnar Cacti (Cereus peruvianus), Shucshungo (Eugenia limbosa), Manchinga (Brosimun alicastrum) are all endangered and well present in the area, not to mention that they are very important and valuable trees for their wood (Quinilla) and nutritional possibilities (Manchinga. For more information on Manchinga check www.mayanutinstitute.org). 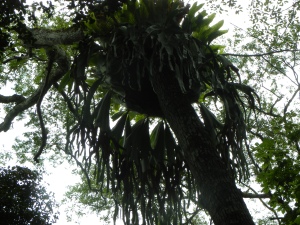 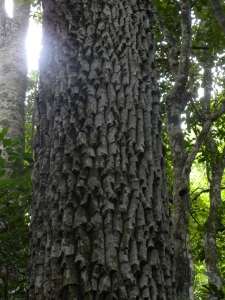 We saw the creek that gives name to this area, Ojos de Agua, a large rock platform where the running water of the rainy season has eroded “eyes of water” on it. Frogs are abundant and a study by expert Rainer Schulte showed that at least 3 species are rare and need conservation here. Birds were not showing themselves much because of the weather but a few interesting species were heard or spotted: Gray-headed Kite, White-eyed Tody-Tyrant, Planalto Hermit, among others.

After returning to the cabin for lunch and some rest the plan was to bird the afternoon but the rains got stronger and didn’t stop until the next morning. At this point the creek was filled with running water and the whole forest was draining it. This forest, due to the hard, red clay soil, does not drain so much rain and so it floods. The path we walked on to get to the cabin was a river at portions upon return, sometimes with water up to our waists. But I was happy I met these people, true conservationists, people who have an ideal and work very hard cause they are convinced of something and they don’t mind not getting paid for it, though obviously they would prefer if that was the case. Hopefully one day they will reach that goal.

TO VISIT THIS WONDERFUL AREA CONTACT WILLIAM RODRIGUEZ (IN SPANISH IF POSSIBLE) AT abofoa@gmail.com

With my guide William and the path after the rains.